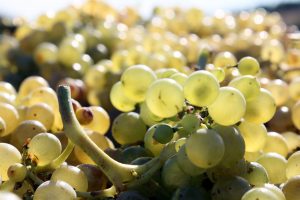 With the blog underway, I can no longer delay talking about one of my favourite subjects: the Garnacha variety which, curiously enough, I “discovered” and fell in love with by studying in France, which is why I started the LaFou project in the Terra Alta region.

Is Garnacha native to France?

It is as much Spanish as it is French. However, in reality, it is not entirely correct to speak of native grape varieties. Varieties are the result of genetic modifications that have taken place over centuries and from different locations where they have been planted, so locating the exact origin is a really difficult feat. Despite this, we can speak of traditional varieties – a term which refers to a variety that is rooted and has adapted to a terroir or environment for a significant time. So we can say that the Garnacha variety, which has been established in both Spain and France for many years, is a traditional variety in both places.

And White Garnacha which is so typical in the Terra Alta region, can we not say that it is from Terra Alta?

Although we don’t actually know where this variety originally came from, nowadays, if you are asked where White Garnacha comes from, Terra Alta is your answer. I say this for a number of reasons: it has been here for hundreds of years and there is nowhere in the world with as many White Garnacha vines as in Terra Alta. This has been the case for generations and is still true today. It is believed that the origin of the variety was somewhere not too far from here, and that it was originally a mutation in the colour of some type of Red Garnacha.

You say that Garnacha has been grown here for so long, yet it hasn’t been that long since we first heard of this variety!

That’s true. However, not because it wasn’t grown, but because it wasn’t a listed variety. The Garnacha variety -as well as other traditional varieties-, were considered to be second-class or inferior varieties in the past. It was mainly used to produce wines with a certain body and degree of alcoholic. In short, it was used to make more popular wines.

At the beginning of the century, wine consumption was popular and until very recently, the Garnacha variety was associated with this type of wine. Likewise, due to its characteristics, it was a variety that was widely used to make “vi ranci”, an aged oxidative wine that preserves well – and can do for decades – in the cellars of many homes.

Could it be that the wine made from this variety was not a particularly good one?

This may be partly true. The Garnacha variety has a certain “fragility” due to its oxidative nature: namely the rhythm and evolution of oxidation processes in its aromatic components. Because of this, it requires certain care. It wasn’t until technology and concepts from French viticulture and winemaking reached areas where Garnacha was produced that this variety -with the exception of “Vi ranci”- could begin to show its true qualities. Whether we like it or not, France is the birthplace of winemaking knowledge that initiated the production of great wines.

And what qualities are these?

It depends to a great extent on the area where it is cultivated, but, in general, Garnacha wines are distinguished by their body, density and elegance. Depending on the area it comes from, there can be greater warmth or structure. In the Terra Alta region, thanks to the winds and characteristics of the soil, elegant wines are obtained. They do not have excessive structure and they present a verve in the mouth and a freshness that fascinates me.

Are you trying to convince me that winemakers do not play a role during the process?

No! Of course we play a role. We winemakers are the interpreters of the landscape and, therefore, we decide what to do with the fruit that comes to us. However, if what differentiates the fruit from your area with that from others, is elegance, why look for structure? And if what differentiates it is freshness, why look for something else? That’s why in LaFou, for example, we opt for a cold harvest. We only use grape-treading during fermentation, and we age our wine in concrete egg-shaped vats.

Interesting! But you are starting to get technical…

Right, let’s leave it at that and have a glass of Garnacha. How does that sound?


Technical cookies are strictly necessary for our website to work and you can navigate through it. These types of cookies are those that, for example, allow us to identify you, give you access to certain restricted parts of the page if necessary, or remember different options or services already selected by you, such as your privacy preferences. Therefore, they are activated by default, your authorization not being necessary in this regard. Through the configuration of your browser, you can block or alert the presence of this type of cookies, although such blocking will affect the proper functioning of the different functionalities of our website.


The analysis cookies allow us to study the navigation of the users of our website in general (for example, which sections of the page are the most visited, which services are used most and if they work correctly, etc.). From the statistical information on navigation on our website, we can improve both the operation of the page itself and the different services it offers. Therefore, these cookies do not have an advertising purpose, but only serve to make our website work better, adapting to our users in general. By activating them you will contribute to this continuous improvement. You can enable or disable these cookies by checking the corresponding box, being disabled by default.


Functionality cookies allow us to remember your preferences, to personalize certain characteristics and general options of our website, every time you access it (for example, the language in which the information is presented to you, the sections marked as favorites, your browser type, etc.) Therefore, this type of cookies does not have an advertising purpose, but by activating them you will improve the functionality of the website (for example, adapting to your type of browser) and the customization of it based on your preferences (for example, by presenting the information in the language that you have chosen in previous occasions), which will contribute to the ease, usability and comfort of our page during your navigation. You can enable or disable these cookies by checking the corresponding box, being disabled by default.


Advertising cookies allow us to manage the advertising spaces included in our website based on criteria such as the content shown or the frequency in which the ads are displayed. For example, if you have been shown the same ad several times on our website, and you have not shown a personal interest by clicking on it, it will not appear again. In summary, by activating this type of cookies, the advertising shown on our website will be more useful and diverse, and less repetitive. You can enable or disable these cookies by checking the corresponding box, being disabled by default.

Press the button “ACCEPT” to accept its use or “DENY” to deny them. In this case ROQUETA ORIGEN, SLU, can not guarantee the full functionallity of the website. You can obtain further information in our COOKIES POLICY at the end of this page.
ACCEPT DENY MORE INFORMATION